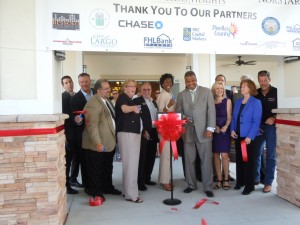 Approximately 200 attended the Pinellas County Housing Authority’s Ribbon Cutting and Grand Opening Celebration recently for the beautiful new Pinellas Heights senior apartments in Largo. In addition to all of the partners that made Pinellas Heights possible, other attendees and participants in the ribbon cutting included Senator Latvala, representatives from Congressman Jolly’s Office and State Representative Larry Ahern’s office, Largo Mayor Pat Gerard, HUD Region IV Administrator Ed Jennings, and PCHA board members Joseph Triolo, Angela Rouson, and Alan Swartz. Jennings praised the efforts of a well-run housing authority that spends public funds wisely with the objective of creating community. Many of the speakers heralded the organization’s efficiency and called Pinellas Heights “a shining example of how private-public partnerships work.”

Pinellas Heights is the result of public-private partnerships providing mixed-financing for 153 one and two bedroom units. The new property has income-based rents for low-income seniors ages 62 and older. Each unit has Energy Star appliances, emergency assistance pull cords, and walk-in showers. The entire community is accessible and the building has controlled access. On-site amenities for active senior living include Angela’s Library, named for Vice Chair Rouson who named the new community, as well as touch-screen computers and internet access, arts and crafts and card rooms, fitness center, and TV lounges and laundry facilities on every floor. A large veranda overlooks the pond with views of the picnic gazebo, grilling area and shuffleboard court.

Norstar Development USA, LLP and PCHA co-developed Pinellas Heights. “This development is the culmination of a lot of effort made easier by the strength of our partnership with the Pinellas County Housing Authority and the commitment of the many professionals involved. Everyone involved should be proud of the results. I know we are” said Richard Higgins, President of Norstar Development USA, LP.

The exceptional community was designed by Bessolo Design Group, Inc. and constructed by Brooks & Freund. Funding for the construction of Pinellas Heights was made possible by:

“Thank you first to PCHA’s board members for their vision and their steadfast commitment to the agency’s mission of providing housing for those in need” said Debbie Johnson, PCHA’s executive director. “We couldn’t have selected a better partner than we have in the Norstar team. From the developer, Norstar Development USA and the architect, Bessolo Design Group, to the builder, Brooks and Freund, the Norstar team was outstanding to work with and provided a superior product, an extraordinary community for low-income seniors” Johnson said.

Johnson continued by saying “We’re also tremendously grateful for the support of all of our Pinellas Heights partners and very excited to introduce Pinellas Heights to the community. These new apartment homes will ensure that 153 low-income seniors have a safe home that is affordable and the City of Largo and Pinellas County will have a safe, beautiful, affordable rental community for many years to come.”

The Pinellas County Housing Authority is a HUD designated High Performing Agency and was named the Florida Association of Housing and Redevelopment Officials 2012 Housing Authority of the Year. As the largest housing authority in Pinellas County, PCHA owns and operates over 1000 units of non-subsidized affordable rentals, in addition to Federally subsidized rentals and rental subsidies, providing housing opportunities for over 8,000 county individuals. PCHA’s focus is on providing affordable housing through the development, ownership, and management of properties, and administration of rental assistance programs.

Norstar Development USA, LP has been involved as lead developer in more than twenty (20) separate mixed-finance/mixed-income public housing authority transactions. Norstar’s first Florida project (in partnership with the Punta Gorda Housing Authority), Gulf Breeze Apartments, was recognized as the National Winner of the Charles L. Edson award for public housing revitalization by the Affordable Housing Tax Credit Coalition as well as being the featured project in the November 2008 issue of Novogradac’s “Journal of Tax Credit Housing”. Norstar has completed or is in the process of developing or constructing over 2,300 mixed-finance multifamily and senior units and has over 1200 more units in various stages of construction and development with housing authorities in New York, Michigan, Florida and Alabama.