Pinellas County Housing Authority has applied to the City of Seminole to rezone a potential affordable, senior housing site on Lake Seminole. 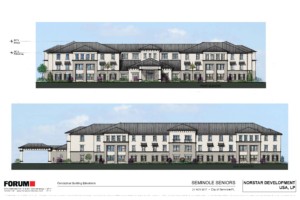 The Pinellas County Housing Authority (PCHA) in collaboration with its developer partner, Norstar Development, intends to develop a senior (62+) community at 9575 Seminole Blvd, on Lake Seminole.

PCHA’s mission is to provide safe, quality housing for persons in need and to cultivate healthy, vibrant neighborhoods for Pinellas County.  To that end, PCHA originally purchased the 13-acre site on Lake Seminole to develop 100 units of affordable housing.  Seminole has a critical need for affordable housing, as evidenced by the fact that ten percent of Seminole’s residents currently live below the poverty line.  The proposed rent for a one-bedroom apartment in PCHA’s proposed development is $600 per month.  Currently, the cheapest available rental unit in the City is $800 per month.  If PCHA is able to move forward with the proposed project, it would be the first designated affordable housing community in the City of Seminole.

When PCHA acquired the property in 2013, the City of Seminole maintained an incentive for affordable housing development in the form of a 33% density bonus that allowed developers to construct more units on the site and spread development costs over more housing units.  At the time, this density bonus would have allowed 100 units to be built on site.

Two recent events prompted PCHA to submit the request for rezoning and land use amendment.  1) An update to the property’s Coastal High Hazard Line has now left PCHA with only 5.99 acres of developable land, and 2) the 2017 update to the City of Seminole’s Land Development Code removed the affordable housing density bonus.  Taken together, these events effectively limit PCHA maximum units on the subject site to 65 units.

In its rezoning and land use amendment application, PCHA is asking the City to approve a 33% density increase, which is what it could have received under the previously maintained affordable housing density bonus.

The difference between the 65 units allowed under the present zoning and future land use categories and the 87 units requested is a difference of only 22 units.  PCHA’s developer partner has designed the structure in a way that minimizes the impact of these additional units on neighboring properties.  More importantly, those 22 additional apartments would mean that at least that many low to moderate income elderly community members would now have a place to call home.

PCHA’s request is going before City Council at City Hall on December 12th at 6 pm.  If the application for additional density is denied at this hearing, the development will be limited to 65 units.